Eavesdropping on the Apostle Paul: a deadly pastime

“Where did Eutychus go, Aristarchus?”

“What’s that?” I asked, trying to concentrate on Paul’s words from the front of the room.

“Eutychus. He was right there in the window a moment ago.”

“The youngster? It’s past midnight. Perhaps he had to go home with his parents.”

“No, they are over there.” My friend Gaius pointed them out where they stood across the room. “Hold one moment. You don’t think …”

Gaius stepped to the window ledge Eutychus had been sitting in.

“No!” He rushed to the door yelling, “Tell Luke to come quick!” as he ran down the stairs.

Luke stood up from his place at Paul’s side and asked, “What is it? Is someone ill?”

I looked out the window to the ground below. “It’s Eutychus. He fell. It looks like he’s dead!”

Eutychus’ mother gasped as his father took her arm. Luke made his way to the door and the room emptied as people crowded together to try to get down the two flights of narrow stairs, trapping his parents inside the room. They came to the window and leaned out.

“My boy! My boy!” His mother cried in anguish.

“Is he breathing?” I called down to Gaius, who was leaning over him. He looked up at me and shook his head.

Luke knelt beside Eutychus and placed his ear to the boy’s chest and nodded at Gaius. Paul pushed his way through the knot of people and threw himself on the body.

“What is he doing, Aristarchus?” Eutychus’ father said. “I’m going down there.” He turned to his wife. “You stay here, Miriam. His body might not look … .” He stopped and turned toward the emptying doorway.”

“No. I’m going to see my son!” She grabbed his arm and turned toward the door, frustration on her face when she saw the crowd still choking the stairwell beyond. 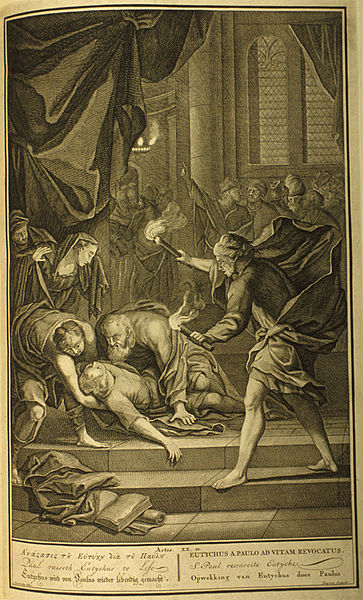 “Wait,” I called. “Paul is saying something.”

They stepped back to the window. We looked down and saw that Paul had his arms wrapped around Eutychus.

Paul rolled off Eutychus and raised him up to lean against his lap. The dead boy’s eyes opened. He looked around, dazed.

“My boy! My boy!” his mother repeated her words from a moment ago, this time not in anguish but joy.

The two parents raced from the room and down the stairs.

Dawn broke as the meeting in that upper room came to a close. Eutychus and his parents were among the first to leave, with Luke accompanying them. Paul sat by himself and reached for some of the food left over from the small meal prepared for everyone after Eutychus’ recovery. Gaius and I were still by the window. He looked down.

“If I hadn’t seen it with my own eyes, Aristarchus, I don’t know if I’d believe it,” he said. “Not even if our friend Luke told us.”

“He is rather a good recorder, isn’t he? I understand he has been taking notes of his travels with Paul and plans on writing another book.”

“He told me it will be about those who belong to Jesus and what they do in the kingdom of God.”

“I imagine this past night will make it into the book, then.”

“When Paul yelled, ‘Don’t be alarmed, he’s alive,’ it reminded me of one of the stories Luke tells of Jesus raising the dead.”

“You mean the little girl from the synagogue?”

“But she was surely dead. Luke’s a doctor and if he thinks the reports of her death are accurate, then I take it they were accurate.”

“Yes, she was dead, yet now she lives. Jesus raised her, and now Paul has done the same by the Spirit of Christ.”

“Speaking of Paul,” Gaius said, looking over at the man eating in the corner, “when he threw himself onto Eutychus’ body another prophet came to mind.”

“Elijah and the son of that widow from Zarephath.”

“Oh, yes. He became very sick, eventually succumbing to the illness and death.”

“And then what did Elijah do? He laid himself on the boy and prayed for God’s healing even thought there was no life left in the body.”

“Three times, if I remember correctly.”

“Yes, and God gave the boy back his life. When Elijah carried him to his mother, he told her, ‘Look, your son is alive!’”

Paul stood up and crossed the room slowly to stand with us by the window.

“What are you two talking about?”

“And some heroes of the faith,” Gaius added.

“Always a good topic of conversation,” Paul said. “But I have to admit that even I have had enough talking for one night. Come, friends, let us continue our journey to Ephesus and—God willing—eventually Jerusalem.”

And so we left.

While the dialog and some details are the product of imagination, Eutychus, Aristarchus, Gaius, and Paul’s time in Troas can be found in Acts 20.

2 Responses to Eavesdropping on the Apostle Paul: a deadly pastime