In Men Prefer Debt-Free Virgins Without Tattoos, Lori Alexander asks “Do you know how much more attractive debt-free virgins (without tattoos) are to young men?” She never answers the question nor cites a survey of young men showing what the actual level of preference is for such women over any other women, but let’s break it down.

Taking the three in the order presented:

Or it could be that Ms. Alexander considers each of these to be in itself an automatic disqualifier.

She also doesn’t mention what happens with those who have been married before. Are widows second-best in her eyes? What about a widow who had to take on debt when dealing with a spouse’s debilitating illness that led to death? Or a widow who also had a tattoo placed on her by the medical team who needed it as a guide to radiation therapy for her own past illness? The article suggests the conclusion is that men prefer other women to them. Again, there’s no study cited to support this but she says it’s so.

There is an unintended consequence of Ms. Alexander’s position, one she may not have foreseen but is just as real for any man reading her post – what of a man who falls in love with a woman who is in debt, has had sex, and has at least one tattoo? Is this then a man who has made a bad choice, perhaps even a fool of a man, a man who does not prefer the debt-free virgin without tattoos that Ms. Alexander says men prefer?

Ms. Alexander doesn’t mention one of the best-known Bible stories about love and godliness, the relationship of Ruth and Boaz. If she had, she’d see that her standards do not stand up to the Bible record.

Ruth, a foreigner from Moab, may have had the skin cuttings or tattoos allowed among her people for worshipping Chemosh, the god of her culture. Also, she was a widow so there goes her virginity. And even though there is no mention of debt, she is definitely penniless and relies on charity to feed herself and her mother in law Naomi. These attributes must place her somewhere on the spectrum approaching the women Ms. Alexander posits are not as attractive to men as debt-free virgins without tattoos.

Yet the Bible recognizes attributes more important, more compelling, than the shallow matters Ms. Alexander cites. It’s right there in the third chapter of the Book of Ruth. Boaz is a rich older man, well-respected among the people of Israel, who desires to marry Ruth because she is honorable, faithful, works hard to provide for her mother in law, and shows wisdom in how she approaches Boaz to propose their marriage. As Naomi puts it, “Wait, my daughter, until you find out what happens. For the man will not rest until the matter is settled today.” (Ruth 3:18.)

One interesting aspect about the way Boaz settles the matter is that another man who by cultural norms would have been expected to marry Ruth has to first decide whether to marry her himself. He does not, and he comes across poorly in the historical record: his rejection of Ruth is based on preserving his own wealth rather than preserving the legitimate interests of his close relatives. (Ruth 4:6.) This clears the path for Ruth and Boaz to marry, creating a family line that would lead to the birth of David who would become king over Israel and to Jesus who is King of all God’s people for eternity.

Boaz found Ruth quite attractive, despite not having all three attributes Ms. Alexander posits as those desired by men. (Ruth 3:10.) Is Boaz unwise in finding Ruth attractive as a woman, someone he worked hard to marry? No.

Since Ruth and Boaz were right for each other, it’s clear the three attributes Ms. Alexander lists must not be a biblically based formula for women to be more attractive than those without the three attributes. It is a random list without any support given by Ms. Alexander for its validity. And in bringing this list to bear, Ms. Alexander denigrates women and men both, by saying women who have taken on debt, etc., are less than other women in men’s eyes, and men who find them attractive are less discerning and wise than other men who disdain such women.

Please pay no attention. Have you found someone to love who loves you back? God’s blessings on you whether you or the person you love have debt or not, have had sex or not, have a tattoo or not, and may you spend a happy life together. 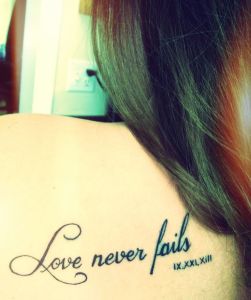 This entry was posted in Uncategorized and tagged debt, Lori Alexander, marriage, Ruth and Boaz, tattoos, virginity. Bookmark the permalink.

51 Responses to The Biblical Attraction of Indebted Tattooed Women