Looking Out for One Another – beyond manliness and femininity

The Bible says to love each other, comfort each other, lift each other up. It does not say that these are specifically masculine endeavors, even when the two people involved are a man and a woman.

Agatha Christie captured this dynamic perfectly in The Secret Adversary where her two heroes, Tuppence Cowley and Tommy Beresford, meet with the spy master known as Mr. Carter.

Mr. Carter paused. “Well, there it is, you see what you are pitting yourself against? Possibly the finest criminal brain of the age. I don’t quite like it, you know. You’re such young things, both of you. I shouldn’t like anything to happen to you.”

“It won’t,” Tuppence assured him positively.

“And I’ll look after you,” retorted Tuppence, resenting the manly assertion.

Tuppence set the record straight for the adventure that followed, just as she had in the earlier conversation leading to their joint venture: an equal partnership or no partnership, and Tommy could take it or leave it.

The relationship of take-it-or-leave-it

And this is his command: to believe in the name of his Son, Jesus Christ, and to love one another as he commanded us. (1 John 3:23.)

Praise be to the God and Father of our Lord Jesus Christ, the Father of compassion and the God of all comfort, who comforts us in all our troubles, so that we can comfort those in any trouble with the comfort we ourselves receive from God. (2 Corinthians 1:3-4.)

Lift each other up:

Two are better than one,
because they have a good return for their labor:
If either of them falls down,
one can help the other up.
But pity anyone who falls
and has no one to help them up. (Ecclesiastes 4:9-10.)

Nowhere do these passages support the notion that men have a special responsibility to care for women that women do not share toward men. Sex and gender are irrelevant to the responsibility people have to one another in the context of those passages. Take it or leave it.

I join Tuppence in resenting manly assertions of protectiveness. I resent that people would assert there is some exclusively manly responsibility that would mean women cannot come alongside men to lift them up.

Particularly, I resent what this would mean for my marriage.

There are times when I’ve been on the ground and needed someone to come alongside to lift me back up. This love and comfort can take a variety of forms but each of them take strength. My wife is strong, and has carried out her God-given responsibility to be strong in my life more times than I could count. And, rest assured, there are times when I needed to count on God working through her to be strong when I was at my weakest.

Crises that threatened my family and that threatened my career have both hit me in later years. She has shored me up when I was falling over, and lifted me to my feet when I fell anyway. And in those times when I remained down, crushed under the burden, she got down beside me to hold me until I could start to rise again.

This isn’t merely metaphorical either. Her physical strength has taken charge when I’ve been physically weak, battling pneumonia that had me bedridden for days and off work for weeks. She steps up and gets the work done when I’ve been unable to lift a finger to help.

How physically fit is she? This fit: 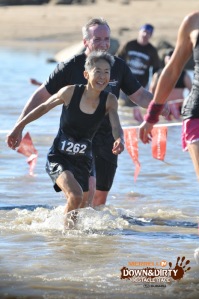 She’s ahead of me because she’s better at this than me. (Post: My Wife and I Trained to Play Dirty)

Some who insist on gender/sex roles among God’s people would not like what they see in my marriage. We don’t fit the prescribed roles. What we do have, though, is a marriage of over 30 years with a grown son and daughter who are doing fine.

In each year of marriage we’ve had the opportunity to love, comfort and lift up each other, and our children have learned how this works in a godly marriage. If we’d stayed within the gender restrictions some people teach, we’d never have been able to do the things God called us to do for one another. We are not restricted in what we can do for God and the people he’s put in our lives, women and men both.

Friendships, marriages, joint ventures – all are designed for much more for the women and men of God than can be realized if people are bound by gender roles God never put on them. You are free to be strong for each other and to rely on the strength of one another, regardless of who is the man and who is the woman.

Take it or leave it? I’ll take it.

This entry was posted in Uncategorized. Bookmark the permalink.