Mutual Submission and Mutual Humility – the way of women and men

[Christina Allen writes of her journey to understanding the mutual love, submission and humility called for by all who belong to God’s family, women and men alike.]

One obstacle that many observant Christians seem to encounter in accepting feminist or Egalitarian ideals, one that I certainly had to find my way over, was the cognitive dissonance inherent in seeking to empower women in a faith that calls for humility. Indeed, this very argument has been used to silence women: how dare you promote yourself when Jesus did not consider equality with God something to be grasped?

It was in struggling with this that I realized that it was not about elevating anyone at all. I realized that the message of Scripture actually indicates that we are all called to humility and submission, and that the error is that hierarchical theology elevates men in the first place. It was then that my Christian feminism became a call to mutual submission and mutual humility.

Jesus’s ministry was announced by the words,

“Prepare the way for the Lord, make straight paths for him. Every valley shall be filled in, every mountain and hill made low. The crooked roads shall become straight, the rough ways smooth. And all people will see God’s salvation.” (Luke 3:4-6.)

This was a revolutionary message. The great and powerful would be brought down low and the low of society would be raised up. The King was coming, and every exalted person would be humbled. Throughout Jesus’s ministry, we also see the low exalted. We see a God who rejected the Pharisee A-team and selected His disciples from amongst the poor, the socially disadvantaged, and the treasonous.

He even allowed women to learn at His feet. 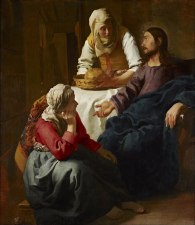 Christ in the House of Martha and Mary, Johannes Vermeer 1654-56 (Wikipedia)

Many see the condescension of Jesus to include the rejected. They don’t see His rejection of the exalted. I begin to wonder if the exalted are capable of receiving Jesus at all. (See the parable of the banquet.) They seem to think that they can, and yet believe they can also retain their position over others. I’m not sure that’s true.

Jesus delivers this message multiple times, multiple ways across the Gospels. And Gentile men who had heretofore been excluded from the inheritance of Israel rejoiced because they too could now inherit.

But their modern male heirs refuse to extend the inclusion to the fullest extent.

Paul had no difficulty in Galatians 3 citing women as equal co-heirs with Christ in the Holy Spirit of God who inherit the role of Spirit indwelt holy priesthood. Modern men are completely comfortable with the idea that Jesus would make the Jews last, but they fail to recognize that the hills to be leveled off in this day and age are more related to male ecclesiastical and social privilege. They themselves are the hills.

Modern patriarchy and specifically Complementarianism, preach a “created order” of men over women in the church and home. I find it hard to believe that the God who inspired Paul to write the first chapter of First Corinthians would support that thinking.

Deborah [the Judge of Israel] Beneath the Palm Tree, James Tissot 1896-1902 (Wikipedia)

God has never been a God to reinforce any kind of perceived merit or entitlement. Throughout the Bible, God chooses second sons, youngest sons, women judges, women warriors, slaves, and the weakest of nations. Deuteronomy 7:7 says

The LORD did not set His affection on you and choose you because you were more numerous than other peoples, for you were the fewest of all peoples.

He seems to choose whom He chooses in order to spite convention and entitlement.

It is my belief that as long as you still harbor entitlement, indulge privilege, and practice prideful religious hierarchy, you will put increasing distance between yourself and God. Our God was not daily sitting in the palaces and high places entertaining royalty and religious elite. He was in the lowest places wooing those powerless, rejected, downtrodden souls who had already assumed the posture of deep humility. It is not for nothing that long after the Resurrection, the Way continued to attract slaves and women, as the Romans remarked, and held little attraction for the exalted.

Complementarians will readily acknowledge that the Bible is full of calls for humility, but they have a workaround. They call it servant leadership and act as if being in charge of everything and having all power and authority is a huge and terrible burden that men gallantly bear on behalf of women. They may be more right than they know.  So much power and veneration, paired with a lack of accountability, set exalted men up for the fall that comes after pride.

Patriarchal and Complementarian theology have set men up as a privileged and preferred class and has theologically subordinated women. And the stink of that rotten fruit reaches the Heavens themselves. We see it with #metoo and especially with #churchtoo.  Our hierarchies are broken and they are dashing our men on the treacherous rocks of sin, and they are trampling our women underfoot. This was never the way the Body of Christ was meant to be.

Our churches have become often too vertical. One simply can’t have humble hierarchy. And the Complementarian theology’s “separate but equal” gender polity is no equality at all.

We see the rotten fruits of that self-delusion in every woman who has been used and silenced by a system that all too readily lends itself to abuse. We have lost the Spirit filled churches of the New Testament where everyone had a song or testimony, where order was almost lost because men and women both were full of prophecy and fire. We have replaced it with a hierarchy that all too often picks spiritual winners and losers and stunts the growth of a majority of its adherents in order to maintain a clear division between “leadership” and “not leadership”. Little wonder our churches are blighted and dying, most relying on cannibalizing other churches for continued growth. Little wonder that church women often face abuse at home and at the hands of the church. There is not enough humility and not enough purifying light.

I believe in churches and marriages where we heed the scriptural call for mutual submission and mutual humility. Power should not rest with one man or even three. Insofar as we are able while still maintaining order, we should diffuse power. One man should not be the face of our church (unless that man is Christ!). The faces of our churches should be all of our faces.

We must topple the idols that so many of us erect in our hearts that make our church leader something somewhat superhuman…because these abuses happen with all of our consent. It is not usually one man who silences church abuse, but often a plurality of church members. We have lost the sense of “we are the church” and have decided “he (little h) is the church”. Too many of us have abdicated our spiritual calling and traded off our inheritance for comfort. No more.

We should all be listening to what the Holy Spirit is saying to us through others. All of us who are in the Spirit have a word or song or something spiritual to contribute. Many have never been told that, never trusted that or tried it. That needs to end. We need to equip by cultivating the spiritual inheritance in each of us. (And I guarantee that not every woman or even most women are stamped “hospitality” alone, and leadership is not an exclusively male gifting).

There are many men who need to experience repentance and humility, and not just the ones who have done something bad. Any man who has ever secretly thought that his masculinity made him better, more called, closer to God, more spiritually privileged or noble, more qualified to any position or spiritual work than his sisters needs to repent. This is spiritual arrogance and it breeds sin in the heart.  Jesus said:

The Spirit gives life; the flesh counts for nothing. (John 6:63.)

We need to embrace that. Our flesh gives us no spiritual advantage whatsoever. And for many, the flesh can be a snare of arrogance that leads to the exploitation of others for the gratification of lusts both fleshly and soul-deep.

Christina Allen is a native of rural Southeast Texas. She attended UT-Dallas and University of Houston–Clear Lake to earn a bachelors degree in Chemistry, and now teaches high school science. She’s passionate about knowing Christ and encouraging others to learn more of Him. You can find her on Facebook and enjoy her insights and conversation.