Jesus is the True Light of Christmas

[On Christmas Eve, 2017, Jane Spriggs preached not only about Jesus’ birth but also about his illuminating trip to the Temple in Jerusalem eight days later. This guest post is adapted from that sermon.]

I’d like to spend a few minutes thinking about Jesus – specifically, about him being the true light of Christmas.

You’ve heard the Christmas story – how Mary and Joseph traveled to Bethlehem for their nation’s census; how Mary gave birth to baby Jesus while they were there – and used an animal’s manger for a crib.

And then shepherds, who were watching their sheep in fields close to Bethlehem, suddenly had a visit from an angel. And when the angel appeared, the sky around them became brighter than the shepherds had ever seen it – because, the Bible said, “The radiance of the Lord’s glory surrounded them”.

The shepherds were terrified, but the angels told them not to be afraid, because they brought good news that would give all people great joy (that’s including you and me) – this baby born in Bethlehem was the Savior, Messiah, and Lord.

And then, all of a sudden, the angel was joined by hundreds of other angels – the very armies of heaven – praising God and saying:

“In the highest heaven, glory to God!
And on earth, peace among people of good will!”

The shepherds quickly ran into Bethlehem, found the baby Jesus, and discovered everything the angels told them was true! 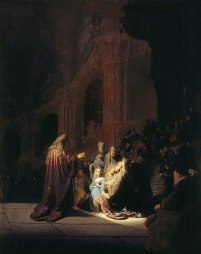 I want to tell you about another part of Jesus’ story – this happened 8 days later, when Mary and Joseph presented him in the temple. A very godly older man named Simeon was at the temple – and when he saw Jesus, he recognized him as the Messiah that would save all people. Simeon took Jesus into his arms, praised God, and listen to one of the things he said:

“…He is a light to reveal God to the nations,
And he is the glory of your people Israel.”

Fast forward with me 30+ years. Jesus has grown up, and has begun his ministry – he is now beginning to tell people who he really is. Listen to what he says:

“I am the light of the world. Whoever follows me will never walk in darkness, but will have the light of life.” (John 8:12.)

Let’s put these things together –

Jesus really is the true light of Christmas. There are many more examples in the Bible – but I want you to hear that Jesus is the light of the world, because he is God. And because he is God, he shines with God’s glory – God’s goodness, and everything else that makes God, God.

And the most amazing thing is – when we are following Jesus, he says:

“You are the light of the world. A town built on a hill cannot be hidden. Neither do people light a lamp and put it under a bowl. Instead they put it on a stand, and it gives light to everyone in the house. In the same way, let your light shine before others, that they may see your good deeds and glorify your Father in heaven.” (Matthew 5:14-16.)

So this Christmas, and in the New Year – follow Jesus and let your light shine before others – so they can see the good things you’re doing and thank God.

I was talking with a woman yesterday who wanted to do something to serve others, but didn’t know what…because money is tight right now. But here’s the thing – the woman is a whiz at doing hair. So, she’s thinking of offering haircuts to homeless people. What a gift that will be.

A seven-year-old girl playing a Christmas carol on her violin touches all of us (that happened at my church yesterday) – what a way to light her light shine!

Whether you’re a man (or woman) who can fix cars or do home repairs, listen to or counsel others, or just have the ability to be kind – your light will shine. And others will see and glorify your God in heaven.

Baby Jesus, whose birth we celebrate, was “born not just to bring light but who is Light in this darkened world!” (Tim Fall.) Follow Jesus’ light, and, in 2018, shine your light. 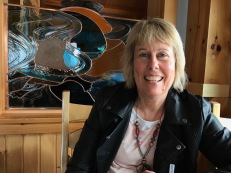 Jane Spriggs is an ordained minister, author, and advocate for change. She is the lead pastor at Monticello Covenant Church, serves on the board of the Monticello Food Shelf, and has training as a spiritual director. She previously worked as a dietitian and health educator; and is passionate about her family, music, God, and dogs. She lives with her husband and two sons in Minnesota, and is on Facebook as well as Twitter (if she could remember her handle).

This entry was posted in Uncategorized and tagged Baby Jesus, Jerusalem temple, Light of the World, Simeon. Bookmark the permalink.

2 Responses to Jesus is the True Light of Christmas