Jesus said to them, “A prophet is not without honor except in his own town, among his relatives and in his own home.” He could not do any miracles there, except lay his hands on a few sick people and heal them. He was amazed at their lack of faith. (Mark 6:4-6.)

Then Jesus went around teaching from village to village. Calling the Twelve to him, he began to send them out two by two and gave them authority over impure spirits. …

They went out and preached that people should repent. They drove out many demons and anointed many sick people with oil and healed them. (Mark 6:6-7, 12-13.)

The contrast is striking. At home Jesus could do little. Once they left the confines of Nazareth and traveled around in Galilee, Jesus was able to empower his followers to heal many.

It’s when they left Galilee altogether that things got really interesting.

When they had crossed over, they landed at Gennesaret [to the far northeast of Nazareth] and anchored there. As soon as they got out of the boat, people recognized Jesus. They ran throughout that whole region and carried the sick on mats to wherever they heard he was. And wherever he went—into villages, towns or countryside—they placed the sick in the marketplaces. They begged him to let them touch even the edge of his cloak, and all who touched it were healed. (Matthew 6:53-56.) 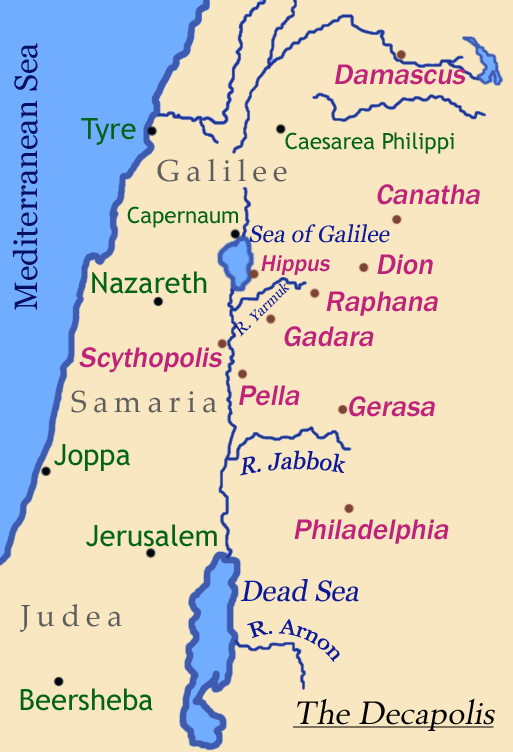 Gennesaret was located on the northern shore of the Sea of Galilee. (Wikipedia)

Jesus had no problem performing miraculous healings in Gennesaret. It wasn’t just some miracles as in Nazareth, or many as in the villages of Galilee, but all the sick in this land to the north who merely touched the edge of Jesus’ clothing were healed. They had great faith in him.

Mark is getting at something more than mere chronology by placing these events in proximity in his gospel of Jesus. He’s speaking of faith.

This is the opposite of what might be expected. In ancient Israel, going back to the time of the Judges, one’s tribe dictated one’s allegiances. This continued into the era of the Kings, with the northern tribes splitting off from the southern tribes over who would rule them.

Granted there is not as much emphasis on tribal affiliation in the time of Jesus’ ministry, but the connections were not altogether lost. Anna is identified as a prophet from the tribe of Asher, and Saul/Paul is a Pharisee of the tribe of Benjamin. (Luke 2:36-38, Philippians 3:4-6.)

Yet when Jesus is among his own family and friends, he is ridiculed. As Mark puts it in the opening lines to this set of scenes:

Jesus left there and went to his hometown, accompanied by his disciples. When the Sabbath came, he began to teach in the synagogue, and many who heard him were amazed.

“Where did this man get these things?” they asked. “What’s this wisdom that has been given him? What are these remarkable miracles he is performing? Isn’t this the carpenter? Isn’t this Mary’s son and the brother of James, Joseph, Judas and Simon? Aren’t his sisters here with us?” And they took offense at him. (Mark 6:1-3.)

They were amazed, resentful and took offense at Jesus.

What does this tell you about Jesus and your own relationship with him? Perhaps it’s a lesson that in sharing his love with those around you, don’t be surprised if those you least expect are the people who appreciate it most.

Expect the unexpected to happen. Love even if you have no idea how it will be received, whether you are loving those you know best or someone you know only because God has placed them in your life in that very moment.

And spread it around. That’s what Jesus did.

This entry was posted in Uncategorized and tagged faith, Gennesaret, Jesus, miracles, Nazareth, Prophet Without Honor, Sea of Galilee. Bookmark the permalink.