There’s no getting around it: Judas Iscariot, hand-picked by Jesus to be one of his closest disciples, was a bad apple.

Mary took about a pint of pure nard, an expensive perfume; she poured it on Jesus’ feet and wiped his feet with her hair. And the house was filled with the fragrance of the perfume.

But one of his disciples, Judas Iscariot, who was later to betray him, objected, “Why wasn’t this perfume sold and the money given to the poor? It was worth a year’s wages.” He did not say this because he cared about the poor but because he was a thief; as keeper of the money bag, he used to help himself to what was put into it. (John 12:3-6.)

Jesus was a good judge of character. Flawless, you might say. Judas’ actions surely didn’t catch Jesus by surprise. How could Jesus then travel, work alongside, teach and live with him for three years? Especially when Jesus knew the prophecy of what would eventually happen.

Still Jesus persisted with teaching Judas the ways of the kingdom of God:

“Leave her alone,” Jesus replied. “It was intended that she should save this perfume for the day of my burial. You will always have the poor among you, but you will not always have me.” (John 12:7-8.)

Judas did not take kindly to this rebuke. Matthew records that same scene and writes that immediately after this Judas decided to take matters into his own hands:

Then one of the Twelve – the one called Judas Iscariot – went to the chief priests and asked, “What are you willing to give me if I deliver him over to you?” So they counted out for him thirty pieces of silver. From then on Judas watched for an opportunity to hand him over. (Matthew 26:14-16.)

Judas carried out his end of the bargain, betraying Jesus with a kiss in the dark hours of the night.

Just as he was speaking, Judas, one of the Twelve, appeared. With him was a crowd armed with swords and clubs, sent from the chief priests, the teachers of the law, and the elders.

Now the betrayer had arranged a signal with them: “The one I kiss is the man; arrest him and lead him away under guard.” Going at once to Jesus, Judas said, “Rabbi!” and kissed him. The men seized Jesus and arrested him. (Mark 14:43-46.)

Yet despite all these actions – leading to the ultimate betrayal – Judas set an example worth following.

Before writing off Judas, it’s important to listen to Jesus’ words in response to Judas’ kiss of betrayal: 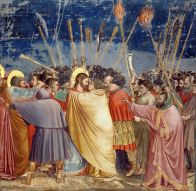 Now the betrayer had arranged a signal with them: “The one I kiss is the man; arrest him.” Going at once to Jesus, Judas said, “Greetings, Rabbi!” and kissed him.Jesus replied, “Do what you came for, friend.” (Matthew 26:50.)

“Friend” is not a word most people would have chosen for Judas. Jesus knew what others didn’t, though. Judas was not beyond hope.

When Judas, who had betrayed him, saw that Jesus was condemned, he was seized with remorse and returned the thirty pieces of silver to the chief priests and the elders. “I have sinned,” he said, “for I have betrayed innocent blood.” (Matthew 27:3-4.)

The religious leaders who handed Jesus over to Pilate, the Roman Governor, for crucifixion took no responsibility, though.

“What is that to us?” they replied. “That’s your responsibility.”

Judas knew he’d done wrong and confessed his sin to the priests who in turn rejected him out of hand. But despite their rejection, he did not keep their money out of spite but threw to the temple floor.

For those who belong to Jesus, the example of Judas is important. You might consider yourself to have done something horrible, denying God or perhaps a sin against someone that you consider to be tantamount to a betrayal of Jesus.

If Jesus called Judas friend, be assured he considers you his chosen friend.

I no longer call you servants, because a servant does not know his master’s business. Instead, I have called you friends, for everything that I learned from my Father I have made known to you. You did not choose me, but I chose you … . (John 15:15-16.)

If Judas can confess his sin to the religious leaders though they rejected him, you can confess yours to Jesus knowing that he will never cast you aside.

This is the example of Judas to follow, but remember to turn to the right Person when turning from the wrong ways.

Turn to the One who calls you friend.

This entry was posted in Uncategorized and tagged betrayal, crucifixion, friend of God, Jesus, Judas Iscariot, thirty pieces of silver. Bookmark the permalink.

9 Responses to Judas Iscariot – Jesus’ Friend with a Good Example