I have no knock against six day creationists. I don’t ascribe to that doctrine myself but cannot see why I should say that others can’t hold to it as a way to read Genesis 1.

I do, though, have a knock against someone who says that if you do not ascribe to a literal reading of a six day creation you cannot claim to recognize the authority of the Bible. Like this:

This is not about young earth or old earth creationism or any other reading of the first chapters of Genesis. This is about someone claiming to be an expert on Scripture and the earth’s origins who is set on denigrating the faith of people who disagree with him.

But let’s take Ken Ham at his word for a moment. Genesis 1, he says, must be read as a narrative of a literal six day period of creation. Such a claim is startling to evolutionists as well as old earth creationists, but let’s take him at his word that this is the only way to read that passage.

How about we look at another passage with a plain meaning on its face. 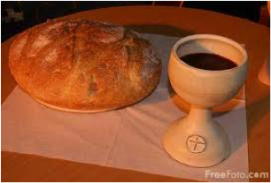 It’s absolutely clear to anyone who reads the passage literally: Jesus took bread and turned it into his own flesh and he took wine and turned it into his own blood. Flesh and blood, not bread and wine. Not metaphorical flesh and blood either, but real flesh and real blood.* That’s what this passage says on its face. According to Mr. Ham’s position on the authority of Scripture, the hunk of bread became a hunk of meat and the wine became plasma and platelets, etc.

That’s the consistent position to take from his tweet, isn’t it? But I suppose Mr. Ham might say the bread and wine were merely symbolic of Jesus’ body and blood. If he says that, I am in complete agreement with him. He might even say that this meaning is consistent with “the absolute authority of the Word of God.”

To get there, of course, the reader needs to allow for metaphor in Jesus’ words. I think they should. Yet if someone tells me they read this passage literally, I wouldn’t question their faith or commitment to the authority of Scripture.

But I would suggest to Mr. Ham and others who insist on there being only one way for a Christian to understand a passage like Genesis 1 – and that by way of reading it literally – that they stop being literal and instead be literary. That is how we read everything else, after all. We come to understand the meaning of a writing by understanding the literary nature of the writing. It’s called reading literarily, as opposed to reading literally.

The Bible deserves our fullest attention, and we should bring all our reading comprehension skills to its study. We can learn from one another as we go along, too. But let’s have no more nonsense about literal readings being required in order to prove our position on the authority of the word of God.

25 Responses to Creationism and Jesus’ Blood – literally a problem