A Lesson in Political Opposition

[An archived post for Inauguration Day on how political opponents can treat one another with love and care, and what this taught me about the love of God for ancient Aramean generals forced to bow to idols.]

Friends Across the Congressional Aisle

Congresswoman Gabrielle Giffords didn’t make it to the State of the Union Address in 2011. She was in an Arizona hospital, having been rushed there just a few days before when a gunman shot her in the head at a public appearance. Her colleagues left her seat empty that night in her honor.

She made it to the State of the Union Address in 2012, though, and those same colleagues stood in applause as she slowly, haltingly and with a limp, made her way to her seat. In what is usually a well-orchestrated event, where everyone is told by their party leaders when they will stand and cheer, when to sit quietly and how they should respond to all that goes on, her appearance broke down the carefully constructed walls of pomp and protocol as cheers of “Gabby, Gabby!” roared through the House chamber in greeting.

Congresswoman Giffords is in the same party as the President, so (as is usual) she was given instructions on when to stand and applaud certain points in the speech. But she’s still recovering and, in fact, had announced already that she would be resigning from Congress the next day in order to concentrate on getting well. Constant standing and sitting, repeatedly moving from one position to another, would tax her strength that night almost beyond its limits. She needed help.

Congressman (now Senator) Jeff Flake, a fellow Arizonan, stood at the ready by her side. When she needed to stand, he took her arm, helped her to her feet. When it was time to sit, he gently lowered her back down. Time after time he stood with her and then sat again when she took her seat. Nothing too remarkable about this, you might say? But there is.

Flake and Giffords are in opposite political parties. His leadership had given instructions too, and they did not include standing whenever the President hit one of the applause lines in the speech. Quite the opposite, they were to sit mute while the President’s party clapped and cheered. Only occasionally would they be instructed to give modest approval to something in the Address. But Jeff Flake stood anyway. Every time his friend and colleague Gabby needed him, he was right there at her side helping her to her feet so she could cheer. And every time she needed to resume her seat, she knew that her friend Jeff would see her safely back into it.

I thought about this the day after the Address and at first it was just another nice moment of setting aside party differences for a friend. But then I started thinking about another time someone stood and bowed, even if it was not in his own interests to do so. And, as sometimes happens, that very night I read about the man I was thinking of, a 9th c. BCE Aramean general named Naaman. (2 Kings 5.)

Worshiping with the Enemy

Naaman was commander of the army of the King of Aram, and he had a horrible and incurable skin disorder. He learned that Elisha, the prophet of God, could help him, so he asked his king for permission to go to Israel. On meeting Elisha, Naaman was sure the prophet would call upon the name of the Lord and cure him right there. Instead, Elisha told the mighty general to wash himself seven times in the nearby Jordan River. Naaman is disappointed and ready to return home in disgust, but his companions convince him to give it a try. He does, and he is cured. There is not a blemish left to show he was ever sick. 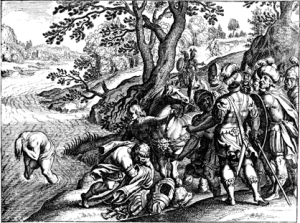 On returning to Elisha’s house Naaman said, “Now I know that there is no God in all the world except in Israel,” and offers the prophet a rich reward. Elisha refuses, giving the glory to God alone. So Naaman asks for a blessing for himself instead:

Here’s the part that blows me away: this seems to me like it would be a tough request for a prophet of God to stomach – forgiveness for bowing down in the presence of false idols (see Lev. 26:1, for example) – yet Elisha responded, “Go in peace.”

What glorious words to receive from God’s prophet. Naaman received the blessing to carry out his duties to his king because God knew what was in Naaman’s heart: total devotion to God. And this is more than just forgiveness for carrying out his duty; it is the promise that Naaman already enjoys God’s peace and that he will continue in it as he returns home.

All of this reminds me that the peace of God is something that he gives to everyone who belongs to him. We might not be able to understand how (Phil. 4:7), but we experience a peace that transcends any we could hope to achieve on our own (John 14:27). And it comes to us through God himself, who will never again condemn us for anything we do ever (Rom. 8:1). We are at peace with God the Father through the work of Jesus, God the Son.

So I say to all God’s people: Go in peace.

6 Responses to A Lesson in Political Opposition