Vince Miller, founder of Resolute (a men’s leadership and discipleship ministry), recently wrote an article for Desiring God entitled Nine Attributes of a Real Man. He listed nine attributes that I agree would be good for every person. His mistake is in identifying these attributes as being what it takes to be a “real man”.

He introduces his list of attributes and supporting Bible passages with this line:

If you are a man looking for true masculinity, consider whether these nine commitments (among many others) would make a significant impact on your masculinity if actively applied in your role as a leader, employee, husband, father, and son.

Don’t you expect the Bible verses he relies on to be steeped in matters that pertain only – and obviously only – to men? Yet in looking at the nine points and passages he raises I am hard-pressed to see the manly traits Mr. Miller assures me are there. Here’s his list (with links to the passages he relies on to support each point):

2. He commits to sacrifice all else in the shadow of discipleship. (Luke 14:26.)

6. He commits to growth and production, especially spiritual fruit. (John 15:8.)

None of the linked passages have anything to do with sex or gender roles, yet Mr. Miller insists that in following these teachings and examples from the life of Jesus men can achieve “true masculinity”.

What does that mean for women who follow the same examples – prayer and bearing fruit and loving others faithfully and so on? Will they achieve true masculinity as well? You might think it obvious that women and men both will become more the people God created them to be.

Mr. Miller does not see the life of Christ that way. In speaking of the Incarnation, Jesus being born and living among us, he writes:

God himself breaks into time and space again to give us the model man. His Son, Jesus, is the perfect divine depiction of manhood. He defines true masculinity.

Jesus lived more for men than for women under this teaching.

Leaving women out in the cold

Is there a perfect divine depiction of womanhood, a definition of true femininity for women in the Bible? Not by Mr. Miller’s reasoning. He earlier discusses the most prominent men in the Bible and finds them wanting in their depiction of manhood. His conclusion: they all fall short and that’s why God had to send his Son to show men how to be men.

According to Mr. Miller, God accommodated fallen men by way of Jesus, the perfect man. There is no indication from Mr. Miller that Jesus is also God’s ministry to women, to be the example of godliness that is found lacking in the lives of the similarly fallen and fallible women of the Bible.

Where might women find a corresponding depiction of perfect womanhood? It can’t be Jesus, if Mr. Miller’s understanding is adopted: Jesus is all that masculinity can be and more. I think it’s safe to assume that means Jesus is not – could not be – Mr. Miller’s ideal of perfect femininity. And even worse, it means that the life of Jesus is more meaningful for men than for women.

This is where the ungodly premise of biblical masculinity and femininity falls apart, revealed for the shifting sand it is. The Bible isn’t a handbook for being a more masculine man or feminine woman with each of those being something different from the other.

Being like Jesus does not depend on your chromosomes

The life of Jesus is truly an example for women and men, boys and girls, and there is nothing in it that can be said to be for men separate from women or vice versa. After all, our calling is not to be more masculine or feminine. Our calling is to be more Christlike. 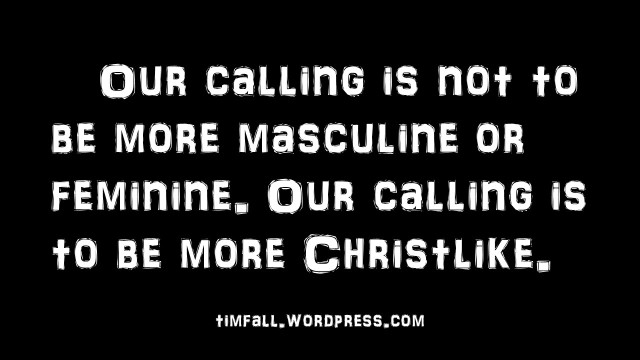 When Paul said as much in his letter to the Church in Corinth, there’s no indication he limited his words to men readers only:

So whether you eat or drink or whatever you do, do it all for the glory of God. Do not cause anyone to stumble, whether Jews, Greeks or the church of God – even as I try to please everyone in every way. For I am not seeking my own good but the good of many, so that they may be saved. Follow my example, as I follow the example of Christ. (1 Corinthians 10:31-11:2.)

Jesus came so that women and men both could learn from him, turn to him, and become like him. We are each made in God’s image, after all, regardless of being a woman or man, male or female.