Make Me A Leper

[Today’s guest post is from my friend Aleah Marsden, who brings us a reflection on God’s provision, our cynicism, and the way of a leper.]

There’s a famine. The Syrians have camped themselves outside the wall while the people inside are literally starving to death. As the king of Israel walks along on the wall—perhaps formulating a new plan of attack, or perhaps considering jumping off—he is abruptly faced with a dispute between women who have boiled one’s son and ate him. The other has not followed through on her end of the bargain to boil her son for food now. A desperate, nauseating and horrific time in the history of God’s people.

The king blames the prophet Elisha for all these problems, and by association the king is blaming God. He sends his right hand man to go kill Elisha. But then the prophet Elisha receives word from the Lord that this time tomorrow food is going to be so abundant it will be sold at bargain-bin prices, even though at the moment a donkey head was being sold for eighty shekels of silver. (Pre-famine you could have bought a whole live horse for 150 shekels.) These people were living in a desperate space where half a liter of dove poop was being sold for what an average worker would earn in six months of wages.

Elisha tells the good news to the king’s right hand man, a captain, and the captain doesn’t believe him. Even if God broke heaven open, how could there possibly be that much food overnight? The prophecy was impossible. Too good to be true.

Scripture tells us that God did this. He made the Syrian troops hear the sound of a vast army marching against them. They lost their heads and tore off, leaving everything behind.

The lepers unknowingly walk into a feast. They eat and drink until they’re content. Then they start hauling off the riches of the camp and ferreting it away in caves. They continue operating under this game plan until one of them says, “We are not doing this right. This is a day of good news. If we are silent and wait until the morning light, punishment will overtake us. Now therefore come; let us go and tell the king’s household.”

They call to the gatekeepers and declare the good news. Word travels to the king’s chambers and gets him out of bed. He’s convinced it’s a trap. They Syrians are attempting to lure them out. So he sends out a search party, who finds, behold, the army has indeed fled, leaving a trail of garments and equipment stretching all the way back to the Jordan.

It’s true: there is provision waiting outside the city walls. The starving residents awake to plunder the camp; in their frenzy, they trample to death the doubting captain – the king’s right hand man – standing in the gate.

I sip my tea and take another bite of the sugar-sprinkled, slightly bitter scone. About as far from starving as you can be.

Forgive me, Father. For I am often like the captain. I doubt what God is capable of. I see the size of the army outside. I know the price of meat in the market. I do not see how the entire world could possibly be transformed overnight. Forgive my scarcity mentality. Even if God were to open the Heavens it would not be enough. I have given up hope. I lack faith. Forgive me, Father. Help me in my unbelief.

Forgive me, Father. For I am often like the king. I am cynical and slow to trust good news, quick to assume the worst of others. Quick to assume the worst of Your plan for me. I would rather gather all the information before I act. I want to fully understand what You are doing, I want to count the cost before I’ll commit to move. I think I can understand the mind and mysteries of God. I believe my risk aversion will protect me. I am proud. Forgive me, Father. Help me in my selfishness and self-sufficiency.

Father, make me like the lepers. Make me like the least of these among your people. Give me empty hands that I would not be weighed down nor held back. That I would live a life of worthy risk, of exposing vulnerability, knowing I truly have nothing to lose. Humble me, for the kingdom of God belongs to such as these. Make me brave enough to seek you outside the city, outside my comfort zone. Make me generous with the riches you provide, always seeking to share the good news of the treasure outside the walls.

For Jesus, my Savior—the Son of God who lived a righteous life—He died outside the city walls. And the scripture tells us that God also did this: He raised Him to life, chasing away the threat of sin and death. Leaving in death’s wake an eternal feast and treasure waiting for us.

And the doubters didn’t recognize their Messiah. They had no imagination for a kingdom other than the one they could see and taste and touch and smell. This kind, humble carpenter couldn’t be the man who was going to change the world. He couldn’t even get himself off the cross.

And the prideful sought to protect themselves. Quick to assume the worst: Jesus is working on the authority of demons. They chose to defend their way of life, even at the risk of their people spiritually starving to death, even if it meant killing an innocent man.

And in the backwards economy of God’s kingdom, those best off are those with nothing to lose. The ones who seek the kingdom and do not hoard its treasures for themselves, but go and proclaim the good news to those still sleeping in the city. Those best off declare the good news to the starving: there is bread which truly satisfies out there! All you who are starving to death run through the narrow gate to life!

Father, open our eyes to the reality of your kingdom, of what you have done; more present than impossible. Keep us from the doubt of worldly captains, from obsession with the comfort and safety of kings. May we be as humble and openhanded with our futures as the lepers. Trusting in your patience, may we continually call out to the ones still waiting, still watching at the gate. 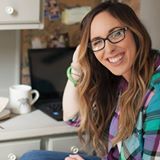 Aleah Marsden is a stay at home mom of four who wakes up before 5am to study scripture and write because she discovered physical exhaustion is more manageable than emotional exhaustion (i.e. consumes copious amounts of coffee). She shares stories of life, faith, and Bible study on her blog, and is also the Director of Communications at Living Bread Ministries as well as the Social Media Manager at Redbud Writers Guild. You can also chat with her on Twitter and Facebook.

5 Responses to Make Me A Leper