Some say that the Bible teaches that men need respect while women need love. I heard it again just a few weeks ago, with the speaker relying on this verse.

However, each one of you also must love his wife as he loves himself, and the wife must respect her husband. (Ephesians 5:33.)

The speaker went further and said this verse is not just about marriage but about all men and women whether married or unmarried: men need respect, women need love. He said it even applies to men in relation to other men. What all men need from each other is respect.

He’s not wrong about people needing respect and love. He’s wrong about it being gender or sex specific. 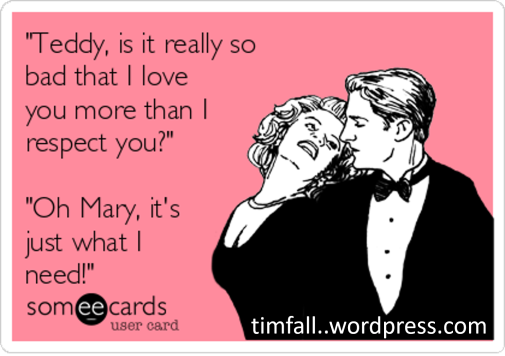 For one thing, using Ephesians 5:33 to teach that all men need respect while all women need love rips the verse from its context. The overall passage starts several sentences earlier with teaching on mutual submission, everyone to everyone, then moves into the sub-context of marriage before discussing other types of relationships. In a marriage, the passage says, the couple is to remember the relationship of Jesus and the church and how they are united. The passage then gives emphatic examples of how Jesus loves his people.

The Bible never says that God loves his people and in return we are not to love God but to respect him. Rather, we are told that the greatest commandment is to love God with all we have. If married couples are to consider their relationship in the context of Jesus loving his people and his people loving him as well, then it is clear that men and women are to love one another.*

The Weight of Bible Authority

Another error in the sermon I heard is that it tries to teach a doctrine – God created men so that they need respect while women were created to need love – from a single verse when that doctrine is itself contradicted by the whole of Scripture.

For example, when it comes to respecting people the Bible teaches this without regard to whether the person to be respected is male or female.

Stand up in the presence of the aged, show respect for the elderly and revere your God. (Leviticus 19:32.)

When it comes to love, this too is for women and men both. After all, in his last night with his friends Jesus told them over dinner:

There is not one word of how these friends, all of whom were men at that dinner, should respect each other as a sign of their fellowship in Jesus. Rather, it is all about love. This was so important that John, one of the men at dinner that night, decades later reminded his friends – men and women both – of the same.

For this is the message you heard from the beginning: We should love one another. …

This is how we know what love is: Jesus Christ laid down his life for us. And we ought to lay down our lives for our brothers and sisters.** If anyone has material possessions and sees a brother or sister in need but has no pity on them, how can the love of God be in that person? Dear children, let us not love with words or speech but with actions and in truth. (1 John 3:11, 16-18.)

The weight of Scripture, then, teaches not that men need respect while women need love but that men and women are to respect one another and love one another. This applies whether you are married or not; it comes in whether you are relating man to man, woman to woman, woman to man and man to woman; it is the norm for Christians whatever the relationship might be. Anyone who teaches that men need respect because they are men and yet women need love because they are women denies the Gospel of Love itself, as expressed in 1 John 3:16.

Love and respect are universally called for from you and universally needed by everyone you meet.

So show the men some love and the women some respect. And vice versa.

*Regarding the instruction for wives to respect their husbands, this is an aspect of their love just as a husband’s love for his wife is an aspect of the submission called for in the passage’s introduction. (See Trevor Sykes’s Wives, “Respect’ Your Husbands for one look at how this instruction would have applied to homes among the churches who would have read Ephesians.)

**The Greek word adelphōn, found 21 times in the New Testament, is translated in the NIV as “brothers and sisters” when called for by the context of the passage (as in 1 John 3, above) while more literal translations (such as the King James and the ESV) read “brothers” or “bretheren” in various places where adelphōn is found. But even if we go with these more literal translations, then John apparently considered men loving each other (as opposed to respecting one another) as of utmost importance.

You knew this was coming, right?

This entry was posted in Uncategorized and tagged 1 John 3, Ephesians 5, Gospel of Love, marriage, relationships, respect, women and men. Bookmark the permalink.