The Truth about Stories with Happy Endings

Sit a spell and listen to a story, one of discovery and loss, wonder and woe: 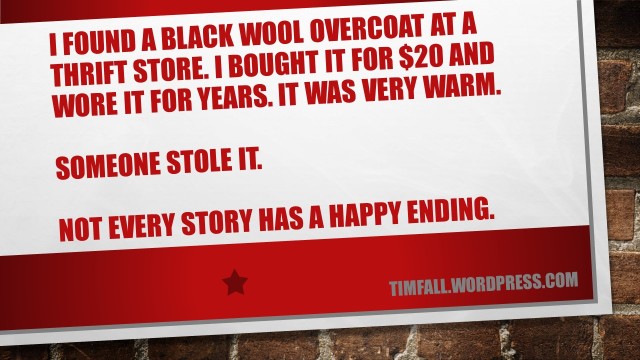 I found a black wool overcoat at a thrift store. I bought it for $20 dollars and wore it for years. It was very warm. Someone stole it. Not every story has a happy ending.

Brings a tear to your eye, doesn’t it? Sniff, sniff.

I miss that overcoat.

There are people who will pursue a sad ending to a story, if for no other reason that it’s the direction they started in and now don’t know how to turn around. Like the Newt Guy in this scene:

Much like the Newt Guy, my wool coat story actually got better.

My coat was stolen because my car was stolen. The car, the coat and everything else inside was gone. I found out when I called my insurance company that the loss was covered by two different policies: auto for the stolen car and homeowner’s for the personal property inside the stolen car. Who knew?

They recovered my car a week later, but none of my property was left inside. When I spoke to the insurance adjustor (the person who manages the claim), she said I had a replacement homeowner’s policy, meaning they would be paying the cost of replacement. I suggested that for the coat, they should just tack $20 on to the reimbursement check. She said she couldn’t do that. They had to know what it cost to replace the coat.

I pointed out that I couldn’t replace the coat in the way I originally acquired it, since thrift stores don’t have regular stock of black wool coats. She insisted that the insurance policy only covers replacement, so I would have to buy a coat and let them know how much.

This seemed crazy to me so I called our insurance agent and told her what the adjustor at headquarters was saying. Our agent said, “That’s right. You’ve been paying premiums on that policy all these years and this is how the company has promised to cover your loss. Go buy a new coat and send them a copy of the bill.”

I bought a new coat.

Before submitting the receipt as part of the claim, though, I called the adjustor one last time and pointed out that this new coat was the replacement for the $20 thrift store coat. She told me to send it in. I did, expecting someone would finally say, “Oh, now we get it. Here’s $20 to cover the loss of that used wool coat.” No one said that. Instead, they reimbursed me for the replacement coat.

Some stories do have happy endings.

The Happiest of Endings

The reality, of course, is that I paid for the new coat myself many times over by way of the insurance premiums sent in to the company all those years I hadn’t made a claim at all. And I’ve continued paying premiums every year since. I know who has come out ahead on this deal, and it’s not me.

There is a transaction I have come out the better for, though. It’s the one where Jesus paid the price for me to live with him eternally.

He was delivered over to death for our sins and was raised to life for our justification. …

For if, while we were God’s enemies, we were reconciled to him through the death of his Son, how much more, having been reconciled, shall we be saved through his life! (Romans 4:25, 5:10.)

Jesus’ death and resurrection accomplished something I could never have accomplished. I was dead and needed life. The dead cannot create their own life, but the death of Jesus and his resurrection work to bring me from death to life in him.

A relationship with God is not an insurance policy we pay premiums for by our good works. It rests entirely on the fact that God wants us with him and has accomplished this through Jesus. As Jesus said:

The policy can’t be cancelled, and its benefits are eternal. The truest story of them all has the happiest of endings.

6 Responses to The Truth about Stories with Happy Endings