The Argument for Love

I don’t think an argument has ever changed my heart. Sure arguments might change minds, but only love changes hearts. In fact, I think most people would rather be encouraged than yelled at, supported than chastised, and loved than argued with. 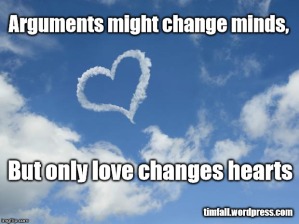 But even the best-reasoned position is markedly less effective when it is delivered poorly. As I’ve advised counsel on rare occasion, “Petulance is rarely a persuasive form of argument.” You could substitute “chastisement” and “berating” or similar words for “petulance” and get the same gist. Love – whether through patience, kindness, listening more than talking, showing respect – works better than all of them.

When I posted a question on Facebook last month I received an email saying I had engaged in eisegesis, i.e., “the process of interpreting a text or portion of text in such a way that the process introduces one’s own presuppositions, agendas, or biases into and onto the text.” (Wikipedia.) Eisegesis is a bad way to try to understand a text.

The better way to understand a text is called exegesis, defined as a “critical explanation of a text or a portion of a text.” (Dictionary.com.) Exegesis involves putting aside “one’s own presuppositions, agendas, or biases” (the hallmarks of eisegesis) and doing your best to understand what the writer meant. Context, language, intended audience are all tools for exegesis.

In regard to the Facebook question I posed, the email writer said, “What you have perpetuated is eisegesis: imposing his or her interpretation into and onto the text, NOT exegesis.” I felt completely unsettled and confused at the suggestion. I couldn’t see where I’d done anything eisegetical at all. Yet the commenter had seen a question I posed and said it was eisegetic.

Jesus turned and said to Peter, “Get behind me, Satan! You are a stumbling block to me; you do not have in mind the concerns of God, but merely human concerns.” (Matthew 16:23.)

I asked whether people thought Jesus was rebuking Peter, or was rebuking Satan in order to protect Peter. If you read the parallel passage in Mark 8:33 the lead-in to Jesus’ words reads “But when Jesus turned and looked at his disciples, he rebuked Peter.” So it is clear in that parallel passage that Peter is the one rebuked.

Why did I ask my question at all? It was to get a conversation going about how followers of Christ need to keep God’s ways in mind and not fall into Satan’s ways. But let’s say my question actually constituted getting Scripture wrong. Does that make it eisegesis?

For two reasons, no.

First – as concerns this particular instance – I don’t have an agenda regarding Jesus’ rebuke, at least not in the sense of a preconceived notion that the direct object of the rebuke was Satan and not Peter. Of the many doctrinal stands I take, having an agenda about Jesus rebuking Satan or Peter is not one of them except to say that Jesus certainly delivered a rebuke for interfering with the things of God.

Second – and more generally – sometimes getting Scripture wrong is just a matter of bad exegesis, not an instance of trying to make a passage fit one’s pre-set agenda. In other words, not all bad exegesis is eisegetical. Some of it is just a matter of getting the passage wrong without bringing one’s own agenda into the matter at all.

The email was an attempt to correct errancy, and I appreciate it in that vein. But the way it was written did not invite a response or dialog. I knew I had not been eisegetical merely by posing a provocative question on alternative interpretations, but figured letting the matter fade was the best course. After reading it a couple more times to make sure I wasn’t missing something, I left it unanswered.

The point really, though, is that lecturing is not the way to change most people’s hearts or minds. Sure, you might get at their mind if your argument is presented respectfully. The better course is to present an argument not only respectfully but lovingly. They are not always the same thing.

I hope to always keep in mind that it takes love to change a heart.

This entry was posted in Uncategorized and tagged argument, Eisegesis, Exegesis, Get Behind Me Satan, love. Bookmark the permalink.

18 Responses to The Argument for Love