You read some things on line and know something’s off but can’t quite put your finger on it:

But I couldn’t help thinking there was something more basic that was wrong with the message in that tweet. Then it hit me. It relies on a false premise.

A false premise is an incorrect proposition that forms the basis of an argument or syllogism. Since the premise (proposition, or assumption) is not correct, the conclusion drawn may be in error. (False Premise.)

The premise in this case is assumed to be understood by those who ascribe to the gender teachings of The Gospel Coalition: men are God’s ordained leaders over women, women follow men in humble submission. If you can’t see God’s justice in this, The Gospel Coalition says, you must not trust God very much.

The problem, as I said, is the use of a false premise. Here, that premise is that God ordained that men lead while women follow. A corollary to this is their teaching that women who won’t follow men are fighting against God’s will.

The notion that a woman would have to live with being under a man’s leadership is described in Genesis, but it is not at all part of God’s original blessing for his people. It comes instead after the first sin, when God told Eve:

Your desire will be for your husband,
and he will rule over you. (Genesis 3:16.)

This is not a prescriptive command for how men and women are to relate to one another, but a description of how much things have changed now that sin has entered the world. It is a consequence of sin, not of God’s original intention, which suggests that things were quite different beforehand.

Like maybe husbands didn’t rule over wives before the first sin.

Looking at the relationship of Adam and Eve before that first sin is revealing:

But for Adam no suitable helper was found [among the animals]. So the Lord God caused the man to fall into a deep sleep; and while he was sleeping, he took one of the man’s ribs and then closed up the place with flesh. Then the Lord God made a woman from the rib he had taken out of the man, and he brought her to the man. (Genesis 2:20-22.)

The original Hebrew language speaking of a suitable helper in the passage gives the impression of someone far superior to what we think of in modern English when we read the word helper; it is a person of equal strength who helps carry the burden, a helper of the same kind as the one being helped. There is no leadership component between the helper and the helped person. In fact, the same Hebrew for “helper” can be found later in the Old Testament when God is described as a helper to his people. God certainly is not the inferior party in that relationship.

The word translated as “helper” is “ezer”, which comes from Hebrew root words meaning strength and power.  The word translated as “suitable” is “kenegdo”, which means facing, corresponding, or equal to.  In English “helper” suggests an assistant or subordinate, but the Hebrew doesn’t carry that connotation.  In fact, the term is used more than 20 times in the Old Testament to describe a superior helper; usually God.  So a better translation is: “I will make him a “strength corresponding to” him, or “a rescuer equal to him”. (Gail Wallace, In The Image Of God: Implications for Gender Equality.)

Since “ezer” is used to describe God as our superior helper, then the word “kenegdo” might be seen as bringing the word “ezer'” down to Adam’s level so that it is clear Eve is a helper equal to Adam rather than superior to him. 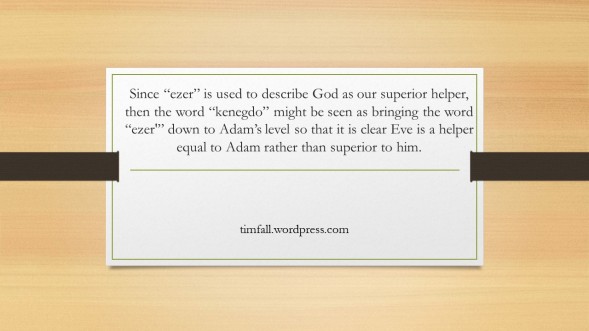 The other telling aspect of the original relationship between the woman and the man in Genesis 2 is how Adam himself looked on Eve, and what the Bible says about Adam’s characterization of their relationship.

The man said,
“This is now bone of my bones
and flesh of my flesh;
she shall be called ‘woman,’
for she was taken out of man.”

That is why a man leaves his father and mother and is united to his wife, and they become one flesh. (Genesis 2:23-24.)

Adam doesn’t say, “Look, I’ve got a little helper to keep me company.” He recognizes that Eve is the same as him, bone and flesh. The Bible confirms that this relationship does not have one person taking the lead while the other follows along. No, it says that in marriage the husband is united back to the wife and they are again one flesh.

Where there is one flesh there is no leader, no follower. So to go back to The Gospel Coalition’s message, my answer is that if by divinely created gender roles you mean the roles men and women have suffered through ever since the first sin, then no. I trust God’s character more than that

But if instead we consider that the truly divinely created gender roles for women and men lead to equality of men and women in function and standing in the home, church, and life then yes, I do see God’s justice in that.

I see it precisely because of my trust in God’s character.

76 Responses to Oppressing Women – a Coalition Built on False Premises