Rejecting the Bible – an interesting way to view scripture and doctrine

I recently interacted with someone on a Facebook forum dedicated to looking at the role of women and men from a biblical basis – that is, the point is to consider what the Bible has to say about women and men in the body of Christ. Our interaction in this instance was on a different point, though; she criticized my use of the words Old Covenant and New Covenant in discussing the eras in which we read of the great relationships of Ruth and Boaz (who lived under the Old Covenant) and Mary and Joseph (in the advent of the New Covenant).

She said the phrases Old Testament and New Testament wrongly give the impression that the original Hebrew Scriptures had been replaced. Yet I hadn’t used the word “testament” at all, and for the specific reason that I was speaking of the covenant the people lived under (or were approaching), not the name of the writings in which they appear. I pointed out to her that I relied on language from Hebrews 8 in my word choice:

By calling this covenant “new,” he has made the first one obsolete; and what is obsolete and outdated will soon disappear. (Hebrews 8:13.)

Her response – verbatim – was, “I don’t care what the Bible says.”

Not Caring About Words

That’s something I hear from people, but it was jarring to read it from someone engaging as a member of a forum dedicated to looking at what the Bible says about women and men. If we don’t care what the Bible says, how can it be the basis for any doctrine, whether on covenants or on men and women? After all, doctrine is merely a word that describes a set of beliefs and when it comes to God it is important to have a correct understanding of what to believe.

I think the answer for some people is that the Bible is fine for doctrine, as long as it results in doctrine they like. But if people are offended by Hebrews 8:13, they reject the passage. They may not recognize or admit they’re rejecting it. Instead they might merely ignore it or finesse the text so that it fits their sensibilities.

That means that when it comes to a right understanding of God, they rely on something other than the Bible. That also means that no one can criticize their understanding as being non-Biblical because the Bible is not their standard or guide. Their sensibilities are a trump card played whenever someone asks them to re-consider a passage suggesting a different way of looking at an issue.

Of course it’s not that we should blindly accept the words of a passage in the Bible without concern for context, adopt a superficial understanding, and then apply that understanding to arrive at a wobbly doctrinal stance. Good doctrine is hard work and takes intentional effort. Wrestle with hard passages of Scripture until you understand them better.

But wrestling with Scripture is not the same as jamming it into a straitjacket. Rather, it takes time and attention to detail. The Bible even gives examples of what this looks like: the Bereans were commended for checking up on Paul’s preaching by comparing it to the Hebrew Scriptures, Peter recognized it can be hard to understanding Paul’s teaching, and Paul himself said it takes spiritual guidance to arrive at a mature understanding of God’s word. Nowhere does it say this would be easy.

One doesn’t wrestle with an idea by rejecting it out of hand. Rather, the idea must be engaged. Such close engagement might lead to understanding that a passage actually means something different than appeared on first blush, but that’s because the Bible is huge and no single passage can be used as an isolated foundation for a doctrinal position.

Scripture reading can be easy: breeze through the passages you like and skip the ones that offend you. Scripture understanding is different. It takes effort, it takes time, and it takes a willingness to engage God and his word.

In the long run, it’s worth it. 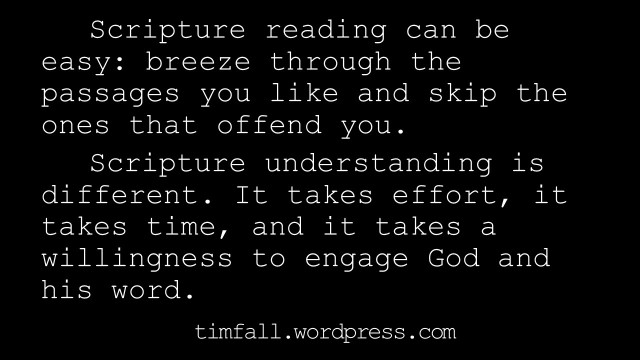 This entry was posted in Uncategorized and tagged Authority of Scripture, doctrine, Hebrews 8, New Covenant, Old Covenant. Bookmark the permalink.