The Bible and Combat Women

[The Secretary of Defense announced that all combat positions will be open to any woman or man who can meet the rigorous qualifications. As Marine Lance Corporal Brittany Dunklee said in NPR’s story yesterday:

I know a lot of males that can’t do what I can do. But as long as you can do it, there’s no reason why you shouldn’t be in combat.

I offer the following archived post dating from the original decision two years ago about women and combat that set the stage for yesterday’s announcement.]

Female vets cheer new era for women in combat: ‘It’s about time!’ said the headline yesterday. The U.S. military is dropping the prohibition on women in combat assignments, opening these up for all qualified members of the armed services. Just what “qualified” means remains to be worked out, but the days of meaningless distinctions – arguments like “A woman can’t do a man’s job, any man’s job” – are over. 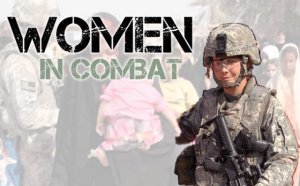 Women in Combat
(Department of Defense)

This announcement follows other changes in the way our armed forces look on their members. In late 2010, Congress set in motion the repeal of the ban on openly gay people serving in the military, with the judiciary then ruling that the “Don’t Ask, Don’t Tell” policy was in fact unenforceable and the President formally announcing its repeal soon after. Even earlier, President Truman ordered the military to desegregate the ranks so that African Americans and other minority personnel could serve in all capacities alongside all other members.

Of course, all these formal actions in some way merely reflect reality. African Americans have been serving in the military throughout this country’s history. So have gay Americans. And women are not only in combat situations every day overseas, even if their job title doesn’t reflect it, but have been on the front lines from the beginning.

Like the headline said, it’s about time we removed these discriminating limitations. Yet my point here is not to insist that the Bible requires women take on combat duties. It’s about how these issues lead to a better understanding of the type of battle we are all called to fight in the kingdom of God.

There’s a kids’ song at church that we used to sing with the younger Sunday School classes. 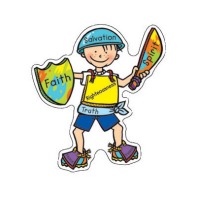 It has hand motions for marching and riding and shooting and flying and saluting, and it’s cute to see all the little boys and girls singing along and marching like little soldiers. Of course, it’s important to remember that the armor of God does not look like something worn on the front lines today, and that our battle is not against flesh and blood but against spiritual forces. But I really like this song for how it points out that all of us who belong to Christ are in this battle together – women, men, boys and girls – because in him there is no male or female.

And through it all, God does immeasurably more in us than we could ever hope to achieve.

Now that’s the way to serve.

This entry was posted in Uncategorized and tagged armor of God, discrimination, spiritual warfare, women in combat. Bookmark the permalink.

10 Responses to The Bible and Combat Women