Flying Away is not Pie in the Sky Theology

The problem is that Marx didn’t say that, or at least he didn’t say it in the way people simply dismissing religion as escapism use it. The full phrase from Marx is:

Religion is the sigh of the oppressed creature, the heart of a heartless world, and the soul of soulless conditions. It is the opium of the people. (Karl Marx, 1843, A Contribution to the Critique of Hegel’s Philosophy of Right Introduction.)

Marx’s main point in that passage’s context was that religion is not to be decried as a false hope, because it is a product of the reality people find themselves in. Rather, he wanted people to see that religion, a man-made construct in his opinion, needed to be set aside in order to reach the truth. The truth he advocated, though, is focused entirely on the self:

The problem with this theory is that there are people in every age who see themselves as the sun that they are to revolve around. None of them have lived such wonderfully enlightened lives that they became compelling  examples for the rest of humanity to follow.

The One Son Offering True Escape

Marx undoubtedly meant his religious criticism to apply to Christianity along with other religions. After all, God’s people have sought escape for millennia, as when David wrote about suffering under his enemies:

I said, “Oh, that I had the wings of a dove!
I would fly away and be at rest.
I would flee far away
and stay in the desert;
I would hurry to my place of shelter,
far from the tempest and storm.” (Psalm 55:6-8.)

If that doesn’t match up with Marx’s view of religion then I don’t know what would.

Yet there are two problems with applying Marx’s aphorism to our faith. One is that the Bible looks at religion not as a way to understand God but as a way to treat the people God has put in our lives:

Religion that God our Father accepts as pure and faultless is this: to look after orphans and widows in their distress and to keep oneself from being polluted by the world. (James 1:27.)

The other problem with Marx’s criticism is that Christianity is unapologetic in its offer of release from the problems of this world. Jesus quoted a prophecy form Isaiah when he preached a sermon in his home town:

The Spirit of the Lord is on me, because he has anointed me to proclaim good news to the poor. He has sent me to proclaim freedom for the prisoners and recovery of sight for the blind, to set the oppressed free, to proclaim the year of the Lord’s favor. (Luke 4:18-19.)

Isaiah the prophet spoke much about relying on God, and used images of flight to convey what it means to be set free in him.

He gives strength to the weary
and increases the power of the weak.
Even youths grow tired and weary,
and young men stumble and fall;
but those who hope in the Lord
will renew their strength.
They will soar on wings like eagles;
they will run and not grow weary,
they will walk and not be faint. (Isaiah 40:29-31.)

Relief from physical infirmity – soaring because of who God is and what he does for us – is the type of belief Marx would consider a veil preventing people from seeing reality. Yet no one has seen the supposed reality Marx promoted.

On the other hand, people have seen the reality God promised. After his  resurrection Jesus spoke to his friends and gave them comfort and counseled them on what to expect next. Then, unexpectedly, he left them. 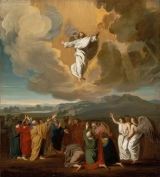 After he said this, he was taken up before their very eyes, and a cloud hid him from their sight.

They were looking intently up into the sky as he was going, when suddenly two men dressed in white stood beside them. “Men of Galilee,” they said, “why do you stand here looking into the sky? This same Jesus, who has been taken from you into heaven, will come back in the same way you have seen him go into heaven.” (Acts 1:9-11.)

Jesus rose in the air, perhaps reminding the disciples of an eagle on the wing which appears to rise effortlessly to heights beyond the reach of human eye.

The Bible promises that when Jesus returns, he’s not the only one who will be soaring.

For the Lord himself will come down from heaven, with a loud command, with the voice of the archangel and with the trumpet call of God, and the dead in Christ will rise first. After that, we who are still alive and are left will be caught up together with them in the clouds to meet the Lord in the air. And so we will be with the Lord forever. (1 Thessalonians 4:16-17.)

Jesus is going to give flying lessons, and everyone is an expert on the first flight.

You Are Born To Fly

If anyone tells you that looking forward to flying with Jesus is escapism, perhaps the best answer is, “Yes, praise God.” Jesus offers you a free path to living with God in his wonderful presence for eternity. Yet this is not an escape from reality but an escape into reality. As Jesus told the congregation in that sermon in Luke 4, people are being held captive and need their freedom.

It reminds me of the gospel tune I’ll Fly Away. Written in 1929 by Albert Brumley, it has become a point of criticism for those who say it promotes pie-in-the-sky religion. It doesn’t.

Brumley got the idea for the gospel tune from a secular song about inmates escaping prison. He kept that sense when he wrote the line: “Like a bird from prison bars has flown.” Brumley knew his gospel, and he knew reality. Jesus came to set captives free, and God causes his people to fly like eagles.

And to illustrate Brumley’s thoughts as he took the original Prisoner’s Song and cast it as a gospel tune, here’s the song along with scenes from O Brother, Where Art Thou?

As you listen to Gillian Welch and Alison Krauss and watch the clips go by, I’ll leave you with this thought: I’ll fly away? Yes, please.

This entry was posted in Uncategorized and tagged Albert Brumley, I'll Fly Away, Jesus' ascension, Karl Marx, O Brother Where Art Thou, Religion is the opiate of the masses, resurrection, Wings of Eagles. Bookmark the permalink.