My Life as a Lawyer: The Day I Got Disbarred

[Updated from the archives.]

After three years of law school, you might think my school days were over. You’d have thought wrong. I then went into two months of intense study for the bar exam, spending my mornings in review classes and my afternoons with practice exams and more review materials as I prepared for the three-day test that takes a toll on you mentally, physically and emotionally. But I passed, and then practiced as an attorney for about 7 1/2 years.

And then suddenly my life as an attorney came to an end when I received a telephone call from the Governor’s office telling me I was being appointed to the bench. It wasn’t a complete surprise, since I’d applied for the appointment long before and spent the preceding two years going through the extensive process of being vetted and interviewed and vetted some more. Still, it was a surprise in the sense that there were other qualified attorneys who were up for the position, and there was no deadline for the Governor to make an announcement. The first time anyone outside the Governor’s office knew was when they told me.

I called my wife right away and, being the ever so clever guy I am, said, “May I speak to Judge Fall’s wife?” There was a bit of squealing on her end of the line as it sank in. This was just the start of a huge change in our lives.

The day I got sworn in as a judge was also the day I got disbarred. California law says that judges cannot hold licenses to practice law, so by virtue of taking the oath of judicial office I automatically removed myself from the roll of attorneys.

When I first learned about this I wondered what that meant for ever practicing law again, so I called the State Bar and asked what would happen if I wanted to return to being an attorney after I stopped being a judge. My main concern was summed up in the question, “Would I have to take the bar exam all over again?” (Remember, that’s a three-day test in this state.)

She reassured me that they would let me right back in with no need to re-take the bar, since, as she put it, “We assume judges have stayed up on the law during their careers.” 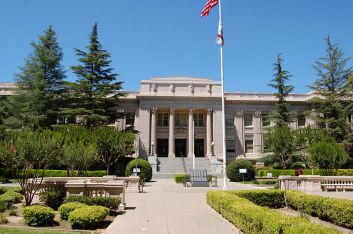 The courthouse I moved into 20 years ago. (Wikimedia.)

It’s not that I’m planning on returning to law practice any time soon. I’ve been on the bench for over 20 years, and I expect to be here for a decade or so more. Still, it’s nice to know I have the ability to fall back on being an attorney should this judging thing not work out.

Yet even though I’m no longer an attorney, I’ve never stopped being a lawyer. How can someone be a lawyer yet not an attorney, you might wonder?

Simple. An attorney at law is a person licensed by the government to practice law, to represent the interests of someone else in court or provide counsel to people needing legal advice.

A lawyer, on the other hand, is merely someone schooled in the law. That’s me. That’s also anyone else who graduated from law school, whether they ever went into the practice of law – or even passed the bar exam – or not. So I’m a lawyer, but not an attorney.

Side note: since I’m not a licensed attorney, it’s illegal for me to practice law, even for free … even for friends and family … even for people who just want to run something by me on their legal issue. You don’t know how many times I’ve had to explain this to people – Sorry, I can’t talk to you about your legal issues. And then how many times I have to ask them to stop asking me questions about those legal issues – “No, I can’t tell you how to get out of your traffic ticket/evict your tenant/plea bargain on your shoplifting charge/etc. … Please stop asking me … Pretty please … Pretty please with sugar on top … Oh for the love of Pete, LEAVE ME ALONE!”

An Even Bigger Change

There’s another change I experienced once, one more drastic than losing my license to practice law when I became a judge.

This one is irreversible.

I went from being dead to being alive, from having a nature that is corrupt in its deathly putrefaction to one that is new and spotlessly clean in its vitality, from one that is forever separated from God to one that is joined to him for eternity. My old self is not just made better; I am made new, and nothing will ever change that:

Therefore, if anyone is in Christ, the new creation has come: The old has gone, the new is here! (2 Corinthians 5:17.)

Your true identity is in God when you belong to Jesus. There’s no going back but when you get to spend eternity with Jesus, who’d want to? And besides, there’s no three day exam to pass to get into God’s kingdom in the first place. Jesus has done all that for you.

Welcome to the courts of God.

This entry was posted in Uncategorized and tagged attorney, bar exam, disbarment, identity in Christ, judging, lawyer. Bookmark the permalink.

12 Responses to My Life as a Lawyer: The Day I Got Disbarred