One man decided that a girl in pants threatened the good order and sensibilities of the high school prom. So when Claudetteia Love said she’d be wearing a tuxedo to the dance, the principal put his foot down: no tuxedo.

Love’s mother tried to talk to him about it.

“[He] said that the faculty that is working the prom told him they weren’t going to work the prom if [girls] were going to wear tuxes. That’s his exact words. ‘Girls wear dresses and boys wear tuxes, and that’s the way it is.’”

The Root reported that the school board president stepped in, saying the principal didn’t have the authority to enforce dress restrictions that weren’t written down anywhere and had never been forced upon students before. Love can wear a tux if she wants.

Love in her tuxedo, looking rather sharp.

I wonder if the principal and teachers would have been as likely to come up with this requirement about gender and clothing if Claudetteia Love weren’t a lesbian. After all, I am willing to bet that the school does not generally require girls to wear dresses to school. If it did, the school board president wouldn’t have spoken of the lack of a precedent.

But this post isn’t about LGBT rights, although (if I am reading between the lines correctly) that is what brought it to the fore. This post is about arbitrary and hurtful gender restrictions and expectations.

Some people would say that enforcing proper gender clothing is biblical, that the Bible tells women not to dress like men and vice versa.

It’s in the Bible, fair enough. But what constitute men’s clothing and women’s clothing? I remember 45 years ago when my grade school dropped its dress code and girls could wear pants to school instead of dresses. Did all those girls show up at school the next day in men’s clothing, earning God’s detestation*? I think not.

Even when someone is wearing clothing that might be thought by society to belong to another gender – think of a woman with a necktie on – there is no mistaking who is wearing the item. Diane Keaton did this famously as Annie Hall in 1977. 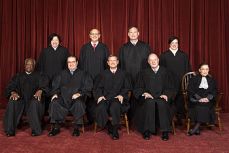 Also, some men today wear items that might be considered more usual for women to wear – my judicial robe comes to mind.

In fact, if you consider what people wore when Moses wrote Deuteronomy, everybody was wearing robes and the attire we have today that is most like a robe is a dress. So to be faithful to the plain meaning of Scripture all men should wear dresses.

Only the most literal of Bible literalists would say that men today must wear robes because men wore robes in Bible times. This is one of those areas where everyone else agrees that you should look at the culture in order to understand the context. You don’t have to have lived back then to imagine that the way women and men wore their clothes had a gender distinction. If everyone wore the exact same clothing, that passage in Deuteronomy would make no sense.

The irony is that the same people who will consider the cultural context regarding clothing will reject cultural context in other passages, such as whether gender-based restrictions on behavior, activities and roles in some passages take prominence over other passages which state that in Christ there is no male/female distinction in his kingdom. And rather than consider women in the Bible such as Deborah and Huldah and Junia as true leaders and prophets and apostles in God’s kingdom, they rationalize away these passages where God placed no restrictions on women leading and preaching and teaching men under both the Old and New Covenants.

When you suggest a cultural construct for the Deuteronomy passage there is a reasoned discussion and much agreement, but try the same for passages such as concerning gender roles and reasoned discussion on cultural context becomes almost impossible. Despite much evidence both in the Bible and in the historical record, gender restriction passages are somehow deemed to outweigh gender freedom passages.

In looking at the whole of Scripture, the most rational  and reasonable conclusion is that God does not approve of rules and restrictions which limit women – just as that school board president did not approve of the principal making up rules about what to wear to the prom. The Bible shows over and over again that God lifts women up in his kingdom to exercise their gifts, and to lead and serve God’s people to bless all of us in his family.

*As for those who belong to Jesus, we are never detested by God no matter what clothes we wear. There is no condemnation for anyone who is in Christ. (Romans 8:1.)