[In today’s guest post Liz Mallory explores what it means to have heroes among us, and in reading it I could not help thinking of Paul’s insight in Ephesians 6:12:

Read on as Liz help us see that victory over evil is possible. And after reading, please head to her blog Millennial Writer for more.]

I have a strange fascination with WWII. I’m not the only one. Our society is drawn to the stories of heroes hiding Jews in the basement and of soldiers beating the odds to be victorious. We honor those who died in WWII more than anyone else–even when we, personally, do not have a relative who died in the war.

There are numerous anthologies written about the love stories, survival stories, and miracle stories of those who lived through that period. Even the word ‘Nazi’ is fully assimilated into our culture as an epithet condemning those adhering to inane rules and strict punishments. For that matter, coming down hard on stranded prepositions and split infinitives earns you the term ‘grammar Nazi.’

Why are we so entranced by a period of such darkness? The whole world was touched by evil. Innocent people were exterminated by the thousands. Some were saved; plenty were not. People lost their freedom, rights, and dignity. Nations had to sacrifice thousands upon thousands of young people to end the oppression.

Why would such a horrible era capture our interest?

If that captivates us, why aren’t today’s evils equally in the public eye? People are still killed en masse. People flee for their lives. Millions are stripped of their humanity daily and forced to work in strip mines, with dangerous machinery, or for dangerous men. Girls and boys are raped for half the price of a chilled beer. People are fighting for survival, and many do not survive. 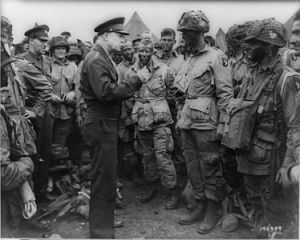 Eisenhower and the troops
(Wikimedia

So why the World Wars? Why are WWII-era books and plays so popular; why are Swing and Blues music always making a comeback; and why do we speak softly of that particular cruel time of genocide when we don’t speak of today’s problems at all?

Because we value their successful heroism. We are awed by the glory of their struggle–a struggle which at the time seemed desperate, gritty, and impossible but we now see in its completion. That much valor in one time and place is something that was never seen before and hasn’t been repeated (let’s pray it never is). Every WWII story is of someone making a difference, whether they knew it or not.

That’s why we’ll share the stories of Hitler’s reign of terror instead of the mass murders taking place around us. We can face the evils of WWII because we know who proved the stronger of that battle. People died, but they didn’t die in vain. In Germany, Jews and the resistance died or were tortured, but they managed to save some people and maintain a rebellion. Young men were sent off to war and many never came home, but they brought down their enemies in the end.

When there is darkness, even a pinprick of goodness shines hope into our souls. We need the stories of World War II to remind us the fight against evil does see victories. We like stories of people who kept fighting even though they didn’t know if their efforts meant anything; and we also like to see that it did mean something in the end.

People did good and selfless things even though they had no reason to hope. We want to do the same, but our courage needs to be inspired by the hope of eventual victory. In the midst of fighting evil, everything looks black. We need stories to tell us that it won’t always be so, that what we’re doing matters.

WWII shows a playing field not unlike today, with tyrants and vicious bigotry, systemic violence and human dignity constantly denied. But the stories also show us an ending of honor and victory. It gives us hope that our efforts are a part of some larger force that will defeat the dark shadow over us. There is still hope.

“It was important, Dumbledore said, to fight, and fight again, and keep fighting, for only then could evil be kept at bay, though never quite eradicated.” (J.K. Rowling,  Harry Potter and the Half-Blood Prince.)

WWII tells us victory is achievable, giving us the strength to keep fighting.

[Liz Mallory is a writer, editor, and book addict with a penchant for over-thinking things. She has a passion for seeing the end of modern sex slavery and, to a lesser extent, sudoku puzzles. Find her on Twitter at @Eliz_Mallory.]

15 Responses to Evil Loses – a lesson from World War 2