Hair Perms Aren’t (permanent, that is)

Art Garfunkel, who looks something like my high school friend Dave

When I was in high school back in the 70s (ancient history to many of you), disco was king and guys got perms. I didn’t, but other guys did.

I remember one of my classmates got his hair curled so tight he looked like Art Garfunkel (more ancient history for many of you). And while I admired his guts and can now admit to a slight envy, I knew I couldn’t rock a perm.

But if you want to see someone who really can rock a perm, check out this this one at Awkward Family Photos. That girl rocks that perm all the way to disco fever!

You know something about perms, though? They fade. They loosen. They grow out. They need to be redone.

This got me thinking about how some people view their relationship with Christ.  Jesse Overholtzer, a 19th-20th c. evangelist, spoke of his early struggles in his faith:

“Satan tempted me to question whether a sinning Christian was still saved. I began doubting my salvation, for I was now looking to my conduct instead of to the merits of Christ.”

It’s a common struggle, but an unnecessary one.

As Overholtzer said, it came from looking at his own struggles instead of looking at Christ. He eventually discovered, though, that we should instead focus on Jesus and what he said:

Anyone who has eternal life in Christ has it because Jesus gave it to them, and everyone Jesus has in his hand is staying there eternally. This is a permanent arrangement. It’s a perm that does not fade or loosen or grow out or need to be redone. He’s got you forever. You are his and he is yours in a relationship that does not end. 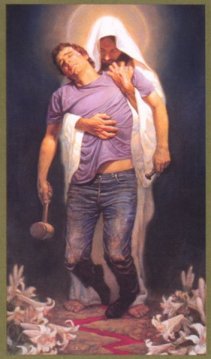 I have this framed and hanging in my office, placed so that I can see it at my desk but it’s not visible to visitors sitting across from me. It reminds me that Jesus chose to grab hold of me even when I was in the middle of committing those sins that would lead to his death in my place. Those sins were killing me, and in fact I was already dead in my sin. He brought me to life, cleaned me up, and strengthens me with the power of his Spirit forever.

19 Responses to Hair Perms Aren’t (permanent, that is)