Teeny Sips and Stale Crumbs or Hunks of Bread and Mouthfuls of Port?

The communion bread I picked up from the tray was about a tenth the size of my thumbnail, like all the other uniform pieces laying there. The tiny plastic cup I removed from the same tray had a tiny bit of grape juice in it, and if anyone had called it a sip-worth they would have been overstating the case.

So different from my early days as a Christian.

I became a Christian while at Sussex University in England and started attending the campus chapel on Sunday mornings. The gathering was small, and every Sunday they’d invite us to the front to stand in a circle around the communion table to partake together. We’d pass a loaf of bread and tear off chunks, saying to one another, “This is the body of Christ, broken for you.”

Then came the cup. It was a common cup, a chalice really. And it was filled with a very nice port.

Have you ever tried port? It’s awesome. When we passed the cup around and said, “This is the blood of Christ, shed for you,” the only thing that kept me from taking a second – and perhaps third – quaff from that cup was the solemnity of the communion service itself.

But nobody took tiny little sips like you get in those plastic communion cups at a lot of churches. Everyone drank deep, taking a mouthful of good wine to wash down the wonderful bread we’d just shared.

I’m not going to address the issue of wine or grape juice, although that is a worthy subject of discussion.

Instead, I wonder about the symbolism in our communion services when those symbols are reduced (literally) to a tiny plastic cup and an even tinier crust of stale bread. It just doesn’t square up with the gospel accounts of the first communion, nor of the type of feast Christ invites us to share with him in his kingdom. For example:

In looking at the Last Supper/First Communion passages and with these other passages to guide us, what do our present symbols used in communion depict? That our God is a skimpy miser who sets a meager table for his people?

I hope that the practice in God’s fellowships and congregations will point people to the abundance we find in Jesus because of his sacrifice for us. Communion is solemn, yes, but it is also a celebration. It is about deliverance and freedom. Jesus himself instituted it all at the great supper of Passover, a celebration of God redeeming his people from the oppressors. It’s a supper full of symbolism, symbols of hearty eating in preparation of traveling with God wherever he leads. 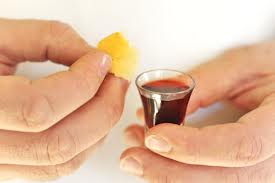 Is this your idea of a feast?

Bread crumbs and a thimble-full of grape juice just don’t seem to say the same thing. God wants us to eat heartily in him. Communion should reflect this.

Let’s break bread together, share the cup, and celebrate communion.

This entry was posted in Uncategorized and tagged Bread and Wine, Communion, Last Supper. Bookmark the permalink.

18 Responses to Teeny Sips and Stale Crumbs or Hunks of Bread and Mouthfuls of Port?